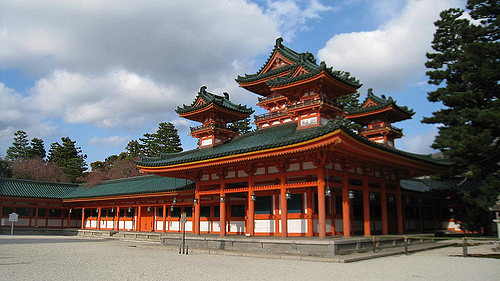 Heian Jingū: Shinto Shrine and/or Yellow Dragon of the Center

Heian Jingū: Shinto Shrine and/or Yellow Dragon of the Center

In 1895, a new Shinto shrine was festively inaugurated in Kyoto; merging various architectural styles, Heian jingū was intended as a testimony to Kyoto’s bygone days as the nation’s capital. Yet in spite of its grandeur, the shrine’s founding is usually explained in very simple terms. It was established to commemorate the 1100th anniversary of the move to the Heian capital and was, therefore, dedicated to the city’s founder, Emperor Kanmu (r.781–806), and modeled after part of his palace compound.

A closer look at the shrine’s founding story, however, reveals a much more complex narrative that illustrates the fits and starts of State Shinto in the mid-Meiji period (1868–1912). Moreover, unraveling Heian jingū’s founding explains how a major imperial shrine (kanpei taisha) in the emerging Japanese nation state could be so replete with Chinese symbolism. Finally, it appears that today exactly those China-derived elements—and their related beliefs and practices—form the core of Heian jingū’s self-portrayal and play a crucial role in its current popularity.

Ellen Van Goethem is associate professor in the Faculty of Humanities, Kyushu University. Her research focuses on ancient Japan’s capital cities, on site divination in East Asia, and, more recently, on the influence of Chinese cosmological symbolism on Shinto shrines.